What are Basic types of transistors? 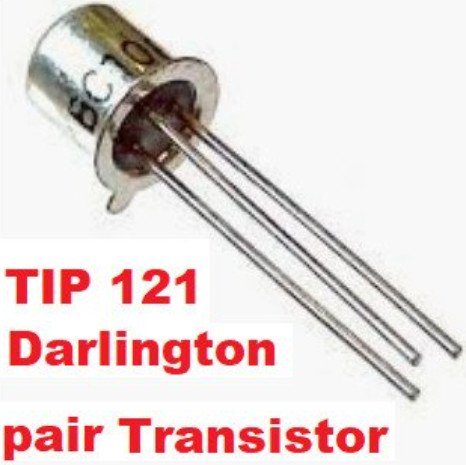 What are the Basic types of transistors?

Today we are going to start learning about transistors. The term transistor comes from the current transferring resistor. The basic types of transistors are bipolar transistors. Previously we’ve talked about how diodes work. Diodes have a PN Junction. 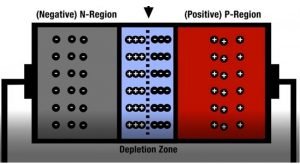 Bipolar transistors have three leads one going to each region typically the middle layer is the base P-type in the NPN and N-type in the PNP. 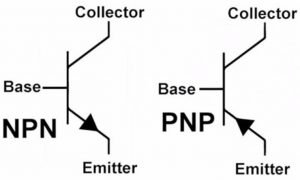 One of the other layers forms the emitter and the third the collector. These are labeled B, E, and C. This is the

the symbol for a diode the arrow points towards the N-type side.

When we combine the P sections of two diodes, there are two arrows pointing out compare this to an NPN transistor symbol notice there is one arrow pointing out towards one of the N-type layers. 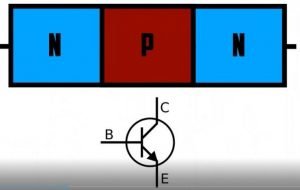 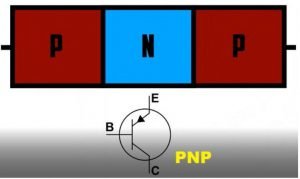 So how do transistors work? Rather than using a physical-mechanical switch, a transistor can act as an electronic switch using signals to turn it on and off. The main current in your circuit would flow through the collector and emitter while the signal current flows from the base to the collector. 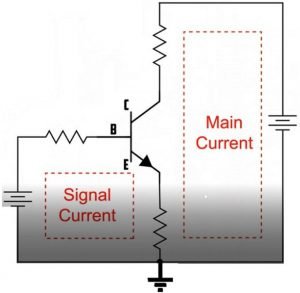 Let’s look at an example. We’ll start with an NPN transistor. With an NPN transistor, we normally bias the device so that the collector voltage is positive with respect to the emitter. The voltage across these two points is referred to as the collector-emitter voltage or VCE. We would then connect the base to be positive with respect to the emitter this voltage is referred to as the base-emitter voltage or VBE. 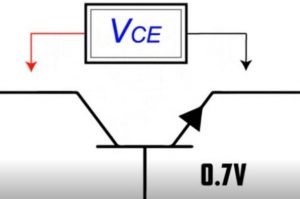 Here’s a circuit where a 9-volt battery connects with an LED and its resistor but it connects through a transistor. This means that no current will flow in that part of the circuit until the transistor turns on. To turn the transistor on, you need a VBE base-emitter voltage of at least 0.7 volts. 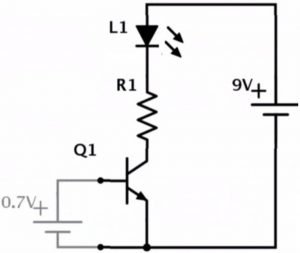 Imagine you have a small 0.7-volt battery when you apply the 0.7-volt battery from base to emitter, the transistor turns on. This allows current to flow from the collector to the emitter and thereby turning on the LED. So once the VBE reaches 0.7 volts the 9 volts from the main power source is available but don’t forget your voltage drop 0.7 volts is lost to heat in the transistor leaving 8.3 volts as your VCE. 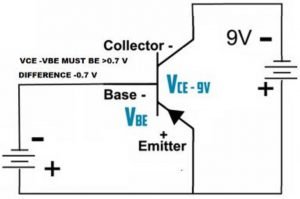 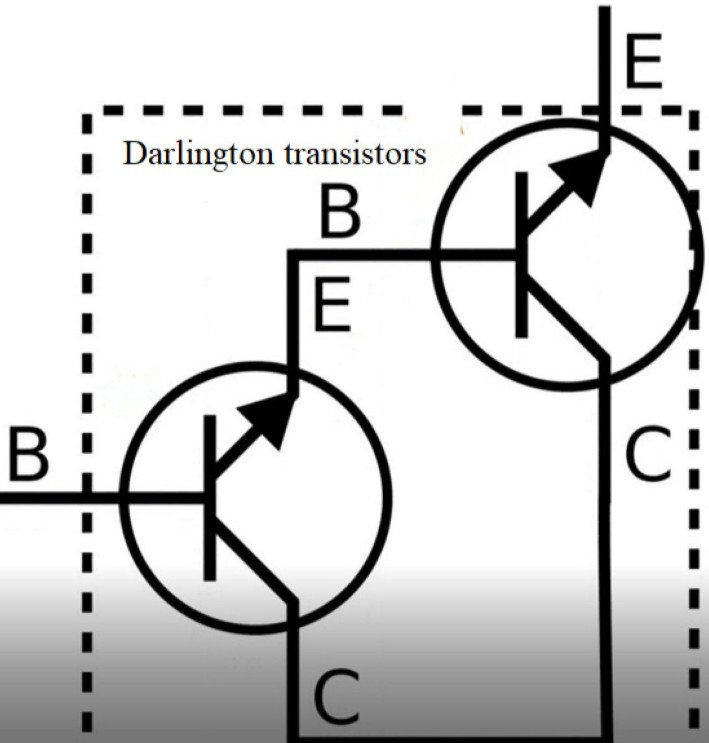 Darlington transistors are useful because only a small amount of current at the base is required in order to get a current gain of up to a thousand times or more. However, there is also a significant voltage to be considered.

There is a good amount of math involved when calculating currents and voltages when using Darlington transistors and really transistors in general. Here are some of the abbreviations used in those equations you should recognize some that I have already mentioned. Many of these can be seen on a transistor datasheet. 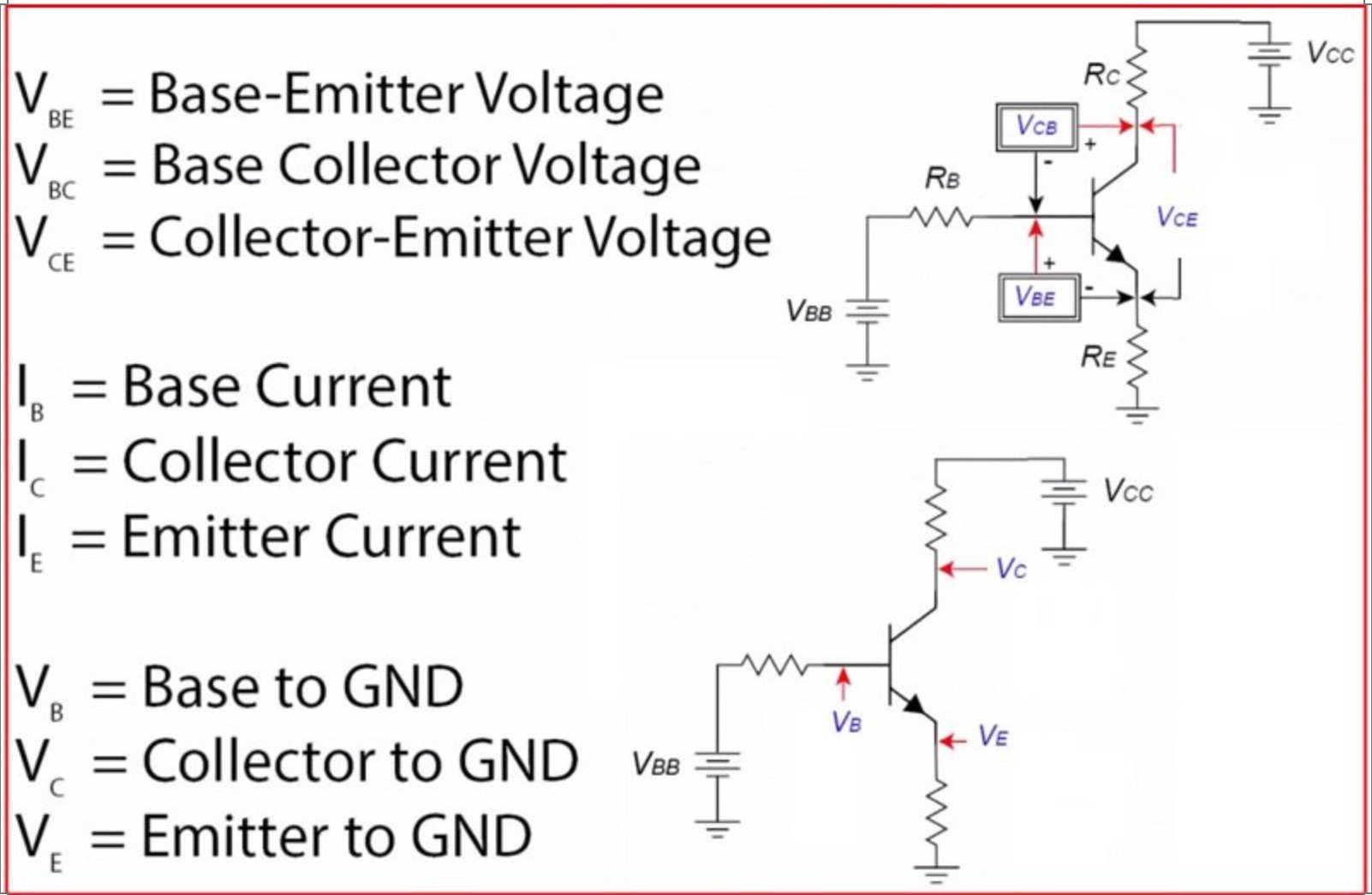 The last two types of transistors I’ll mention are Field-effect transistors. The two most common types are JFETs and MOSFETs but we’ll have to save those for another time. Transistors can be a little complicated to understand so I hope I gave you some good first steps to get you on your way.