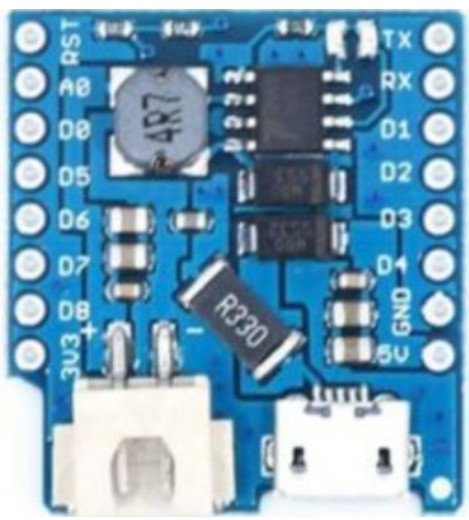 Let’s say you just created an awesome circuit that requires 5 volts to work properly and you want to make it portable. The easiest way would be to use a small Lithium Polymer battery in combination with a boost converter to step up the 3.8 volts of the battery to a stable 5-volt output but to prevent the battery from over-discharge, it is advisable to add a TP4056 board between the battery and the boost converter which also prevents the battery from short circuits and can even charge it up through the micro USB inputs. The only problems are that this setup is relatively big and thus not ideally suited for portable applications. So it would be best if we have one circuit which can charge up the battery, protect it from over-discharge, and short circuits and boost the voltage up to 5 volts. A popular board type that can handle most of these jobs is the Adafruit Power Boosts but needless to say they are not the most budget-friendly option. Luckily though, I recently found out WeMos  D1 mini battery shields which can apparently charge up a Lipo battery and boost its output up to 5 volts. I did a couple of tests to determine all the available features of the board and measure the efficiency of the boost converter.

By measuring the voltage at the 5-volt pin, we can see that the circuit successfully boosts the voltage up to 5 volts without any problems. I started the testing by using a 5-volt power supply in order to charge up the battery to its charging cut-off voltage of 4.2 volts. After plugging in the micro USB cable, the red LED lights up and the battery gets charged up with a constant current of around 500 milliamps. And by shorting the two solder pads on the back (J1 see the next Figure), we should be able to increase the charging current to 1 Amp which was more like 700 milliamps at best but nevertheless, once 36 minutes has passed and the battery voltage reached 4 volts, the charging process entered the constant voltage modes.

And after a total time of around one and a half hours, entered a cut-off voltage of 4.186 volts the green LED lighted up which means the charging process was done. So all in all the constant current and voltage charging mode work nicely only the charging current was a bit low.

Another useful feature is that when the micro USB cable is connected, the boost circuit automatically disconnects and the 5-volt output delivers the USB power.

Now for the next tests, I connected my Lab Bench power supply to the battery input of the circuit since I can simulate different battery voltages with it and also set a current limit in case something goes wrong.

But on the other hand, due to its low quiescent (idle state), the input current of only 13 micro-amps my 1100 milliamp-hour battery could power the circuit for 9.6 years. The only truly negative aspect of the circuit is that there is no over-discharge and short circuit protection but if you are familiar with electronics then this should be a fair trade for such a cheap $2 board.