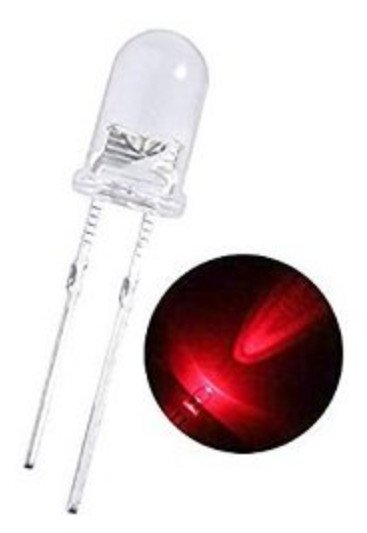 What is a light-emitting diode (LED)? A light-emitting diode (LED) is a two-lead semiconductor light source. It consists of two elements of processed material called P-type semiconductors and N-type semiconductors. These two elements are placed in direct contact, forming a region called the P-N junction. In this respect, the LED resembles most other diode types, but there are important differences. The LED has a transparent package, allowing visible or IR energy to pass through. Also, the LED has a large PN-junction area whose shape is tailored to the application.
Hence LEDs are semiconductor diodes, electronic devices that permit current to flow in only one direction. The diode is formed by bringing two slightly different materials together to form a PN junction. In a PN junction, the P side contains excess positive charge (“holes,” indicating the absence of electrons) while the N side contains excess negative charge (electrons).

How does a LED emit visible light?
A light-emitting diode (LED) is a semiconductor device that emits visible light when an electric current passes through it. The light is not particularly bright, but in most LEDs it is monochromatic, occurring at a single wavelength. The output from an LED can range from red (at a wavelength of approximately 700 nanometers) to blue-violet (about 400 nanometers). Some LEDs emit infrared (IR) energy (830 nanometers or longer); such a device is known as an infrared-emitting diode (IRED).

What are the benefits of LEDs (or IREDs)?
Benefits of LEDs and IREDs, compared with incandescent and fluorescent illuminating devices, include:
Low power requirement: Most types can be operated with battery power supplies.
High efficiency: Most of the power supplied to an LED or IRED is converted into radiation in the desired form, with minimal heat production.
Long life: When properly installed, an LED or IRED can function for decades.

What are the typical applications of LEDs?
Indicator lights: These can be two-state (i.e., on/off), bar-graph, or alphabetic-numeric readouts.
LCD panel backlighting: Specialized white LEDs are used in flat-panel computer displays.
Fiber optic data transmission: Ease of modulation allows wide communications bandwidth with minimal noise, resulting in high speed and accuracy.
Remote control: Most home-entertainment “remotes” use IREDs to transmit data to the main unit.
Optoisolator: Stages in an electronic system can be connected together without unwanted interaction.

Identifying different types of LEDs
Today’s LEDs are available in many different types, shapes, and sizes, a direct result of the tremendous improvements we’ve seen in semiconductor technology over recent years. These advancements have led to better illumination, longer service life, and lower power consumption. They’ve also led to more difficult decision-making, as there are simply too many types of LEDs to choose from. To help organize everything, LEDs are broken down into three main categories, and their subtypes appropriately consolidated:
Category 1: Miniature- see the next Figure. This is perhaps the most common form of LED available today. Miniature LEDs are considerably small and usually available in a single shape/color. They’re used as indicators on devices such as cell phones, calculators, and remote controls. These miniature LEDs can be placed directly onto a circuit board, with no need for a heat-controlling/cooling device. As such, they are also used in sophisticated and technologically intense automated industries. There are three subtypes of miniature LEDs: low-current, standard, and ultra-high-output, all of which vary in terms of current, voltage, and total wattage, depending upon the manufacturer. There are 5- and 12-V miniature LEDs available, too. These particular lights are slightly different from standard miniature LEDs in that they incorporate a suitable series resistor so as to directly connect to a higher power supply.

Category 2: High-power
Improved diode technology has resulted in this new category of LED, also referred to as a high-output LED as it offers a much higher lumen output than standard LEDs. In fact, their high-power chips can emit light that registers several thousand lumens. Subtypes of high-power LEDs are typically characterized by a few parameters, including voltage, wavelength, and luminous intensity.
It should be noted that these lights pose the danger of overheating and so need to be mounted on an appropriate form of heat-absorbent material to allow the heat to cool via convection. This keeps them productive and effective and helps the light avoid an early burn-out. See the next Figure. The title of this category is fairly self-descriptive and there are several subtypes of LED that fall under it. Here are some of the most common:
Flash, Bi-color and Tri-color, Red, green, blue (RGB) LEDs, Alphanumeric and Lighting LEDs
Typically, the flashing LED is a standalone light that serves as a form of attention-seeking indication. It may look like a normal LED, but it contains an integrated circuit, in addition to the LED, which flashes the light at a specific frequency. Flashing LEDs are designed so as to be connected directly to a power supply with no series resistor required. You can find them in things like vehicles, signs, etc. A bi-color LED light has two light-emitting dies in a single casing. It features three leads and is offered with either a common anode or common cathode. The wiring for the bi-color LED is considered “inverse parallel”; that is, one is forward and one is backward. This means that only one of the dies can be lit at a time. Current flow alternates between dies in order to produce color. RGB LEDs include red, green, and blue emitters, which allow for it to combine the three primary colors in different amounts to produce new colors with incredible precision. There are literally millions of possibilities of color combinations with today’s increasingly sophisticated controllers.

The alphanumeric LED light has fallen in popularity in recent years. While some point to the cancellation of the television show 24, the decline is actually due in large part to the increased sophistication of LCDs, which offer greater visual flexibility and much less power consumption.

Lighting LEDs (also referred to as LED lamps, LED bars, or illuminators) come in many different shapes and sizes, including the popular Edison light bulb design. As mentioned throughout this article, heat is the enemy of an LED. An example of ways in which manufacturers are addressing this issue with these more commonly used LEDs is they incorporate an aluminum/ceramic body with fins to increase the total area for heat to escape.

What is an Oval LED?

An oval  LED  is specifically designed for variable-message signs and passenger-information signs.  The oval-shaped radiation pattern and high luminous intensity ensure that these devices are excellent for wide-field-of-view outdoor applications where a wide viewing angle and readability in sunlight are essential. These lamps are tinted and diffused. The encapsulation resin contains anti-UV material in order to reduce the effects of long-term exposure to direct sunlight.