Definition of an Electronic Component 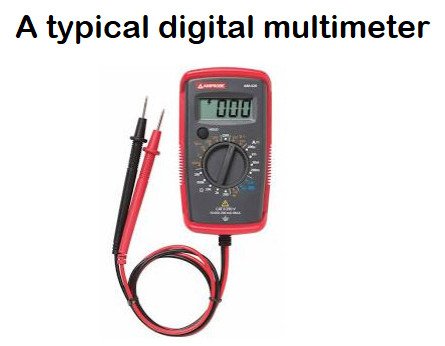 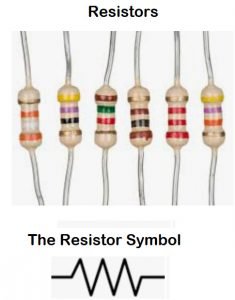 Various components, such as a LED, require only a small amount of current to function- usually about 10 mA. When the LED receives excess current, it converts the excess current to heat that too much of which can kill an LED. To reduce the flow of current to components such as LEDs, we can add a resistor between the voltage source and the components. Current can flow freely along a normal copper wire, but when it encounters a resistor, its movement is slowed. some current is converted into a small amount of heat energy, which of the resistor. 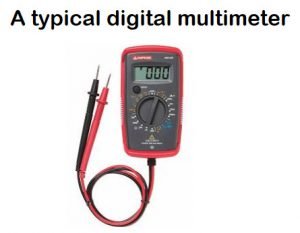 A multimeter is an incredibly useful and relatively inexpensive piece of test equipment that can measure voltage, resistance, current, and more. Electricity is invisible, we need a tool to visualize the voltage and current and a meter will be sufficient for our initial experiments.  If you buy online, try to check customer reviews, because reliability may be a problem for cheap meters.

I suggest you do not buy an “auto-ranging” meter. Because, when you want to check a 9-volt battery, the meter figures out for itself that you are not trying to measure hundreds of volts, nor fractions of a volt. The trouble is that this can trick you into making errors. What if the battery is almost dead? Then you may be measuring a fraction of a volt without realizing it. The only indication will be an easily overlooked “m” for “millivolts” beside the large numerals of the meter display.

On a manual-ranging meter, you select the range, and if the source that you are measuring is outside of that range, the meter tells you that you made an error. I prefer this. Also, you may get impatient with the time it takes for the auto-ranging feature to figure out the appropriate range each time you make a measurement. But it’s a matter of personal preference.