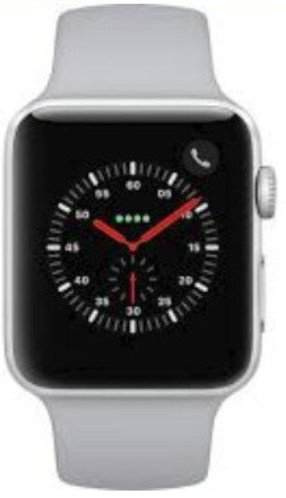 Apple has conquered the smartwatch market. The Watch’s design is very functional, with its bright, colorful square display making it easy to read text indoors or out, and its two buttons plus a touchscreen make it easy to navigate the interface. The spinning crown is particularly great for scrolling through lists, zooming in on images or maps, or making quick volume adjustments when listening to music. Therefore, Apple’s watch has a very iconic design, as this year’s Series 3 ($399). Apple Watch (series 3) looks exactly like the first two models. So, with a price tag of $329 (and up) Apple Watch Series 3 without LTE, is that it’s hands-down the best option if you want a smartwatch to go with your iPhone.

The original Apple Watch is a great smartwatch, but it needed help with exercise monitoring and communicating. The follow-up Apple Watch Series 2 added GPS and water resistance up to a depth of 50 feet, so you could take it on a run and it would track your route on a map without having to be connected to an iPhone.

The Series 3 watch adds a cellular radio to the feature set so you can leave the phone at home and still make calls and stream Apple Music to your Bluetooth headset.

The first two apple Watch models needed to be wirelessly connected to an iPhone to make or take phone calls, The Series 3 with LTE has had its problems, like the Wi-Fi software bug and launch-weekend carrier hiccups. But the watch has already improved by leaps and bounds, thanks to a software update that added streaming music and manual control over cellular and Wi-Fi connectivity so your watch doesn’t get stuck somewhere between the two. Additionally, battery life has been greatly improved with the Series 3 over earlier Watch versions. While Apple still only says the Series 3 is good for “up to 18 hours” of battery life, The reason for the longer battery life is the new, more efficient processor and a larger battery cell in the Watch itself, designed to compensate for the GPS and LTE functionality. Longer battery life will continue to be a struggle at this size, even though the Series 3 has a bigger battery than its predecessors.

The cellular radio can also be used for Siri, email, and text messages, but using LTE radio instead of a connection with an iPhone will significantly reduce battery life.

You can still use the watch alongside the iPhone, and it’s a fine smartwatch that does everything a lot faster than its predecessors because of faster S3 chipsets. Thanks to its new S3 processor and improvements made in watchOS, everything happens faster on the Series 3.

The LTE Series 3’s biggest issue is that it costs too much for what it is. At $399 for the 38 mm and $429 for the 42 mm, plus $10 a month for cell service, the watch should be more capable and have far better battery life. If you want the Series 3, get the non-LTE version, which starts at a much more reasonable $329.Apple released two configurations for the Series 3 – one with LTE and GPS (starting $399) and one with GPS only for $329. Apple is still selling the original Series 1 starting at $249.

To check out different models of Apple Series 3 smartwatches on Amazon.com, click HERE