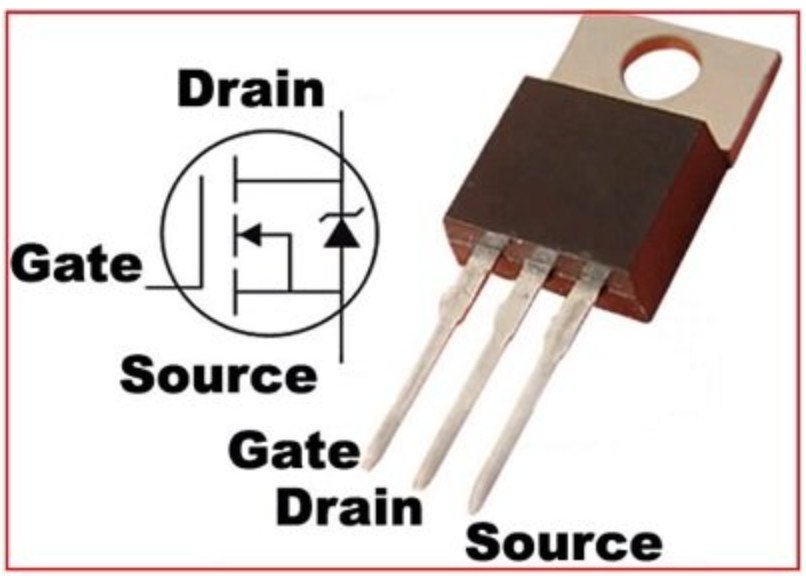 In this tutorial, I am going to go over the basics of a popular transistor and show you how you can use it to control different gadgets. What is a transistor? A transistor is a device that allows you to use small changes in voltage to switch things on and off. They are kind of like a valve in your plumbing system but instead of controlling the flow of water, you’re controlling the flow of electric current.

To make things as simple as possible I’m only going to talk about the easiest type of transistor to work with. The N-channel MOSFET. Basically, they work like this: When the transistor is off, no current can flow. So it’s as if one of the power wires on your gadget has been disconnected so obviously, the gadget will stay off. See Figure 1. 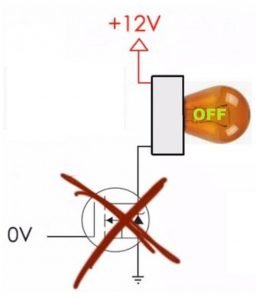 When the transistor is on, current can flow and it’s like both of the power wires on your gadget are connected now so the gadget will power up. See Figure 2. 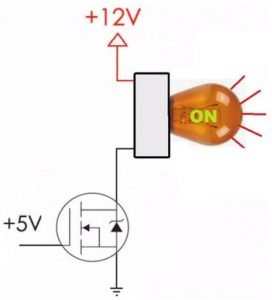 Okay, so you’ve got all that? Let’s talk about how you’ll hook up the transistor. N-channel MOSFETs always have 3 pins called Gate, Drain, and Source. I know the names are kind of funny-sounding but you will have to memorize them Gate, Drain, and Source. The drain is the pin that the current will drain into. The source is the pin that the current will flow out of. And Gate is the pin that will turn the transistor on and off kind of like how a water gate valve will control the flow of water. See Figure 3. 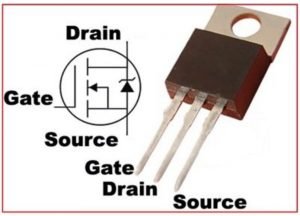 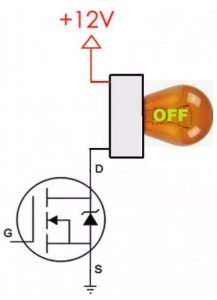 Here’s the equivalent circuit when the gate is at 0V. The transistor stays off so no current can flow, so the headlight stays off. See Figure 5. 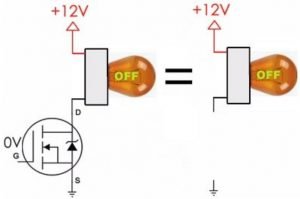 Here is the equivalent circuit when the gate is at 5V. The transistor turns on and starts acting like a very resistance current path so current can flow. Current will flow from the power supply through to your load into the drain of the transistor and then and then out from the source of your transistor into the ground. So when the transistor is on, your gadget will turn on too. 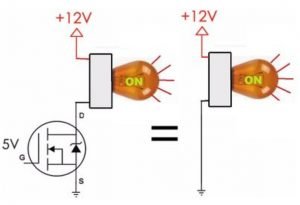 Now let’s talk a little more about the signaling voltages that are going to the gate. There are a lot of different ways to do it and that’s why transistors are so much fun. Here’s an example with your computer’s parallel port pins. When the parallel port outputs 1(Which would be 5 volts) the transistor turns on and here’s another example with a 6 volt solar cell. When the light shines on the solar cell, the gate sees at least 5 volts so the transistor turns on. And there are hundreds of other ways you could switch the transistor on so basically you can control anything with anything.

Now I would like to clarify something for safety’s sake. Over here on the gate side of things you want to keep the signaling voltages less than 15 volts 0 to 5 volts is fine, 0 to 12 volts is fine but if you try to signal things with a 0 to 30 volts signal, you will blow something up.

However, on the drain side of things, you have a lot more freedom in the voltages you can use. The only limitation is what the transistor can handle. This IRFZ44 is rated for up to 60 volts so it can switch 12-volt loads, 50-volt loads whatever I want all the way up to 60 volts DC. So I could switch LEDs on and off. I could switch a string of low voltage Christmas lights on and off. 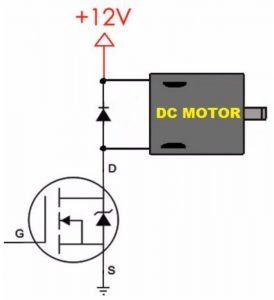 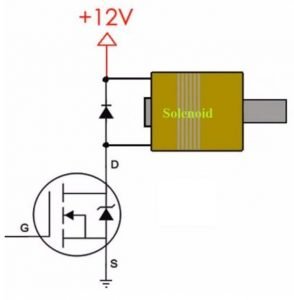 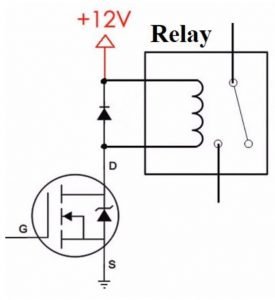 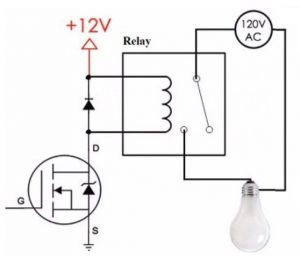 Now, remember I just showed you the basics of one type of transistor. Now you know how to use an N-channel MOSFET and that’s all you need to turn any DC powered device on or off.

In the end, some N-channel MOSFET transistors include: